Call to schedule an appointment

Do I need a physician’s referral to freeze samples? 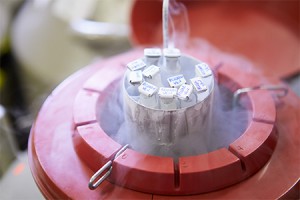 Freezing eggs and/ or embryos is more complicated, requires more time and effort to prepare the female for egg retrieval, and is therefore, more expensive.  The female must undergo controlled hormonal stimulation so that multiple eggs are produced in a given cycle.  The eggs are retrieved vaginally or via laparoscopy, so physician involvement is a must.  If embryos are to be frozen, a sperm source must be available, whether via partner or donor.  Storage fees for eggs or embryos are about the same as for sperm, however, preparation and retrieval of the eggs in addition to medications required to stimulate egg production is significantly more expensive.

What are the costs involved?

A Sperm Cryopreservation fee is applicable for each sample collected. All samples are then subject to a monthly storage fee.  The monthly storage fee is not dependent on the number of vials in storage or the number of samples collected. A credit card on file will be auto-charged on a monthly basis. Please call us at 614-451-4420 for current prices.

Do you provide long term storage for frozen samples?

Yes, RDI provides storage for all types of cryopreserved specimens.  Our storage facilities are monitored onsite and remotely at all times.

Possible scenarios for situations in which RDI would provide storage might include (not necessarily a complete list):

How long can my samples remain frozen?

To the best of our knowledge, sperm, eggs, and embryos can be stored in liquid nitrogen indefinitely. All cellular processes cease at liquid nitrogen temperatures. There is no cellular metabolism, no uptake of energy sources, and no excretion of waste products; the cells remain in a state of “suspended animation” until thawed. Without an “aging” process, the thawed cells are similar to those frozen. There will be some cells which do not survive the freezing and thawing process, however, those that survive are often the hardiest and most viable. There have been pregnancies reported using sperm that had been frozen and stored for over 20 years and from embryos frozen for over 15 years as of the date of this website.

How can my frozen semen samples be used in the future?

There are generally 3 types of semen vials that can be frozen, and multiple types of vials can be frozen from one collection. The first type of vial is for artificial insemination. This is termed an IUI (IntraUterine Insemination) or ICI (IntraCervical Insemination) type of vial. A physician will monitor the menstrual cycle of the female, and, when the potential for fertilization is optimal, the physician will inseminate the thawed sperm into the female. This is the least expensive procedure of Assisted Reproductive Technologies (ART), however the success rates are also the lowest. The second type of vial is used for In-Vitro Fertilization (IVF) procedures, and the third type of vials is used for IVF with IntraCytoplasmic Sperm Injection (ICSI). In either procedure, the female undergoes a hormonal regimen whereby she is stimulated to produce multiple eggs during a single cycle. Just prior to ovulation, a physician will retrieve the eggs, either surgically or during an office visit. For IVF, the retrieved eggs are then combined with the thawed sperm in a petri dish within the laboratory. For ICSI, one sperm is injected with a very fine needle into each mature egg retrieved. After 3-5 days, the resultant embryos are transferred back into the partner’s uterus. IVF and ICSI are more involved, more technologically advanced, more invasive procedures and are, therefore, more costly, but they require fewer total sperm cells than for insemination. For ICSI, the number of sperm required is equal to the number of eggs retrieved. Your physician will determine what type of procedure should be attempted, depending on the number of vials of frozen sperm in storage and the total number of sperm cells available.

Should I address my frozen samples in my will?

For use, shipment, transfer, or thawing of any specimen, we require the client depositor’s written, notarized or witnessed permission. Sperm client depositors are required to address disposition of frozen sperm upon death as part of the storage contract we provide. We will follow the information on the disposition form in the event of death. This information can be changed or updated at any time.

Addressing use of frozen specimens in a will is suggested in addition to the information we request.  However, if addressed, please be sure that the information we have on file corresponds to anything stated in a will or other legal document, and if two parties are involved, that both parties agree on the content of the advisement. We suggest consulting an attorney for additional questions or concerns.

What is third party reproduction?

Third party reproduction refers to the use of egg, sperm, or embryo donors, as well as gestational carriers or surrogates.  Donors, carriers, and surrogates offer wonderful gifts and can be used in almost any assisted reproductive technology procedure available.  Use of third parties is becoming more and more commonplace as both single women and single men seek becoming parents, but need a sperm or egg donor.  Cancer survivors who banked sperm, eggs, or embryos may not be able to establish or carry a pregnancy themselves due to treatment, but through the help of a carrier or surrogate, are able to create a child using their own genetic material.

As the use of third parties in assisted reproductive technologies becomes more and more common, the traditional “donor” definition becomes more complex.  Both a husband and his wife become directed donors if he and his wife are going through an IVF procedure using the wife’s sister as a gestational carrier (because neither the husband, nor the wife is sexually intimate with the gestational carrier, the recipient of embryo(s) created by the husband’s sperm and the wife’s egg).  If the couple was instead using anonymous donor eggs with the husband’s sperm and the wife was carrying the pregnancy, the only “donor” in that situation would be the egg donor.

“Donors” have specific testing and screening requirements, including particular tests performed within certain timeframes relative to retrieval of the eggs and/ or sperm used for a procedure.  RDI works with both anonymous and directed sperm and egg donors as well as with embryos that have been donated anonymously or as a directed donation.

I have a billing question. Who can I call?

If you have a question regarding billing issues, contact the business office at (614) 451-4420.  We will be happy to assist you.

Why do I need a physician’s referral (script)?

Lab results must be released to a referring physician for interpretation.  As a lab, we only release results, we do not interpret them.  Your physician must review the numerical values relevant to each parameter for a particular test ordered and then determine whether or not your values fall within normal range for your particular situation.  He/ She can then prescribe a treatment plan or further evaluation based on the results.  Your physician knows your history, your future plans, and your current situation, and can best relate your results relative to all of them.  Results can also be forwarded to another physician upon your written request.

Why do I have to schedule an appointment?

When you schedule an appointment, you are scheduling technician time to properly evaluate your sample.  When working with biological samples, it is important to initiate testing in a timely manner.  There are some tests that require extensive set- up and/ or incubation times, and we want to ensure that each client sample is given the appropriate attention.  We will work with you in scheduling appointment times that are convenient for you.  Appointment times are available Monday thru Friday, 7:30am to 3pm EST.  If a particular appointment time or day is not required, we can typically schedule you within 2 business days.

How long does it take for results to be sent to my physician?

Most results will be faxed to your physician 3- 5 business days after testing.  However, cryopreservation results may take up to 7 days.  If your physician’s office has not reported results to you within 10 days, please contact them.

Why do I have to pay during the time of my appointment? Can’t you take my insurance card?

Insurance coverage varies widely from insurer to insurer.  Initial diagnostic testing can often be covered.  Be sure to check with your insurer prior to your appointment.  We will provide you with a receipt to submit to your insurance company for any applicable reimbursement directly back to you.  However, we do require payment in full at the time of your appointment.  We accept cash, check, money order, and all major credit cards.

Why do you need my partner’s name for my report?

One of the most common reasons for visiting RDI is because couples are undergoing fertility evaluation.  Obviously, the male’s semen analysis or other semen testing results are a very important component of the fertility evaluation as a whole.  Since results are sent to the referring physician and that physician may be the partner’s OB/ GYN or the male’s urologist, having both names on the report enables the referring physician’s office to match results with the appropriate patient’s chart.  The partner’s name is not an absolute requirement, but simply a convenience for those interpreting or reviewing the results at a later date.

Sperm banks and egg donor agencies are well established and well versed in the use of both anonymous and directed donors. Use of egg and/ or sperm donors is commonplace in the industry today. If you are considering a donor in your quest to establish a pregnancy, we recommend the following local establishments:
Sperm donors (both anonymous and directed): www.cryobio.com
Egg donors: www.ohioreproductivemedicine.com